from a feature on historical color guide: primitive to modern times (1938):

the historical color guide: primitive to modern times is an intriguing little book written by elizabeth burris-meyer, described on the book’s title page as the “dean of the school for fashion careers.” published in 1938, the book presents thirty different color schemes for use by designers, from interior decorators to dress-makers. burris-meyer proposes her schemes as psychological portraits of a time or place, from the complex tones favored in prosperous times to the brilliant purity of more “primitive” impulses.

the palettes are each presented as the distilled essence of either the work of a painter, a culture, or an historical epoch. one is at first charmed by the seemed naivete of the ambition, but then completely seduced by burris-meyer’s clever mixture of intense hues and gently muted tones. part of the book’s appeal is the startling intensity of the color chips, actual samples of painted paper that have been pasted into the book by hand…

… the other pleasure afforded by the book is the author’s obvious delight in her subject. each palette occasions a paragraph or two of historical background, and burris-meyer is typically generous with her praise. several passages find her swept into a reverie, as in her description of the quattrocento paintings from which she derives the ‘italian primitive’ palette: “a delicate blush of an evening or morning sky starts at the horizon and runs through from cream and apricot to a deep blue-green at the zenith.”

readers, however, will also encounter her obvious dissatisfaction with certain moments in color history: after commenting on the “appalling quaintness” of the victorian era she wistfully ponders the decorative tendencies of the period: “there has been much conjecture as to the reason that the swooning bombast and homely clutter of the victorian period should have found such acceptance in this country, but the same state of decoration was extant in france, so the reason is probably just a universal state of mind.”

color-forecasting has become an amazingly important aspect of the design industries. burris-meyer’s book is proof that looking backward may be more interesting than looking forward.…….. — 2wice mag 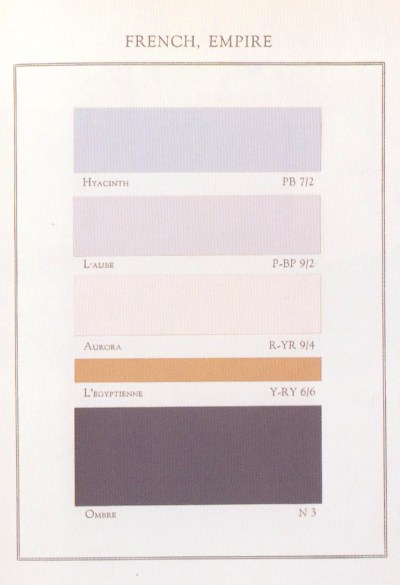 ^ The hues favored by Napoleon are difficult for the amateur to use, and have a limited practical use. Due, however, to Josephine’s more cultivated taste, pale blue, grayed blue-violet, mauve, aurora, feuille morte, tabac d’espagne and terre d’Egypte were fashionable in both dress and decoration.

The original sketches for the Aubusson carpets designed for Malmaison by the architects Percier and Fontaine, and now found in the Musée des Arts Decoratif, furnish one of the most authentic sources of folor for the period. The page above is adapted from this source. 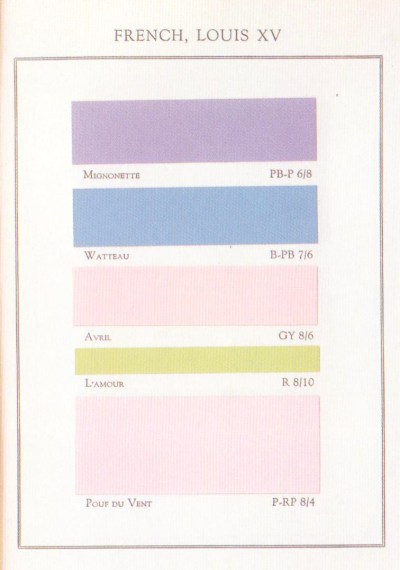 ^ During the reign of Louis XV, the brilliant and pleasure-mad crowds who thronged Versailles were clothed in the gayest colors. The dominant personalities of the whole period were women, mistresses of the King. Of these, Jeanne Antoinette Poisson le Normant d’Etoiles, Marquise de Pompadour, was supreme, and the rose color which was her favorite seems to express the entire period. Her influence supported Boucher, Watteau, Montesquien, Diderot, Van Loo and Greuze. Through the artists she patronized were established the colors of the period: light, facile, feminine, floral, mirthful, piquante, and pastoral colors — light blues, violets, yellows, greens, grays, and rose. Elegant, artificial, dextrous colors were used in paintings and in costumes. 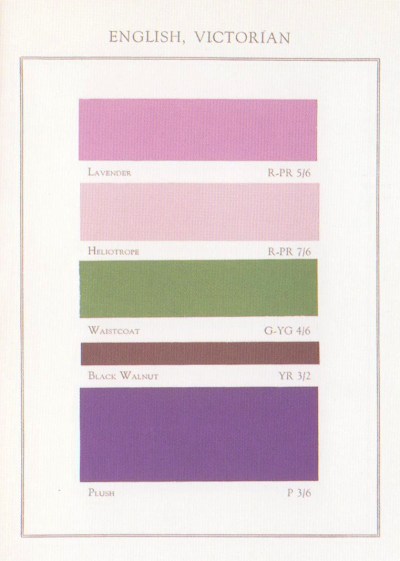 ^ One has to choose color sources with care when searching for schemes from this dangerously ponderous, overdone period. There is a certain appalling quaintness in color schemes derived from the wax flowers and hair mementos under glass bells, or the flamboyant cabbage rose and blue on tan carpets. […] Depressing gravy browns, morbid dark purplish reds, and dark bottle green are typical in the interiors. […] Gentlemen’s costumes… furnish usable schemes. It is in this source that most of the charm and sentiment, and the least depressing manifestations of the period, are to be found. 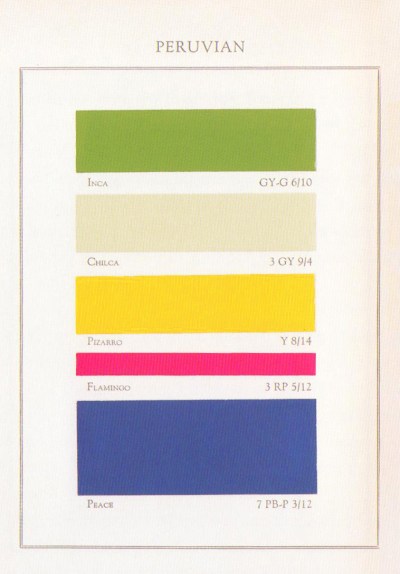 ^ Go to the applied arts of Peru and Guatemala to study an honest, unrestrained appreciation of color. The color expression of these countries in an amalgamation of 1) the rich Spanish color with its Moorish heritage, brought by the Conquistadores, 2) the Oriental, from the trade of the Far East with the New World…, and 3) the native Indian arts. …Each of these sources consists of bright intense color, so the result of their mingling might be expected to be interesting for anyone studying color. 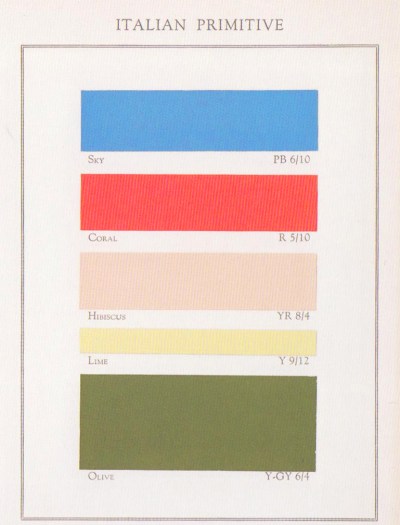 ^ The brilliant, gay landscape that formed backgrounds for Italian paintings of the latter half of the fourteenth and the first half of the fifteenth centuries has a miniature-like quality that is quite adaptable to modern decoration. Framed by precisely opened windows, and behind the central figures of the compositions, are vistas of a beautiful, orderly countryside. Here, tiny coral, shrimp-pink, pale yellow and white coutnry houses perch on dark, olive-green hills that roll gently on and on to a far horizon, in receding values of blue-green and olive-green, until they mingle with the sky. 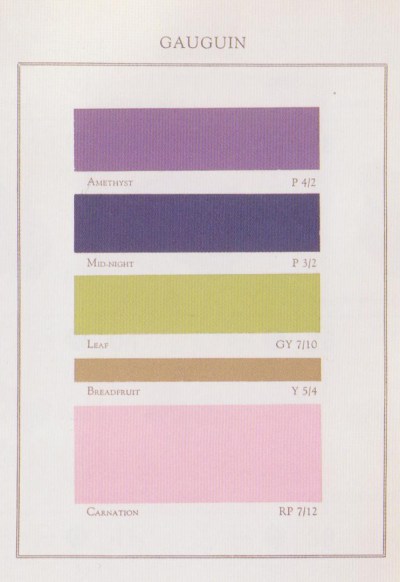 ^ The color of Gauguin is bold in combination but, at the same time, more ingenious than that of most moderns. Maurice Denis said “Gauguin freed us from all the restraints which the idea of copying nature had placed upon us” …Gauguin’s work is essentially decorative. In his work, form is dependent on surface patterns of line, mass and color. The compositions seem almost synthetic designs of violet, Veronese green, vermillion and yellow, inspired by the colors of the tropical landscape in which he lived. 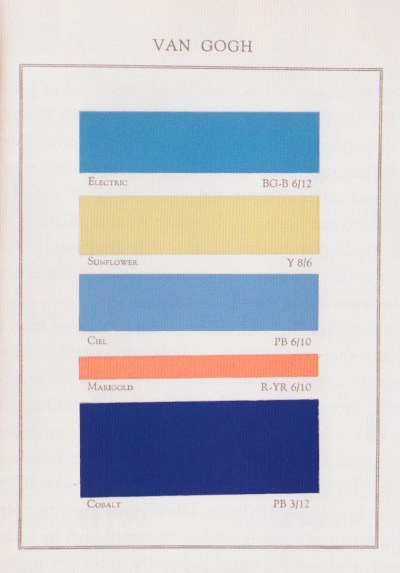 ^ His early, dark, thwarted colors were replaced after he discovered the possibility of color patterns from Japanese prints and contact with other modern painters, by compositions of brilliant yellow, blues, vermillion and green. The paintings of van Gogh seem to be the interpretations of the passion of a man for colored paint, almost barbarous in their display of tense emotions. …Whenever there is a need for hot, searing, crackling energy in color, the later paintings of van Gogh should prove an excellent point of departure.

how to: make puppets

Theme by Anders Noren — Up ↑